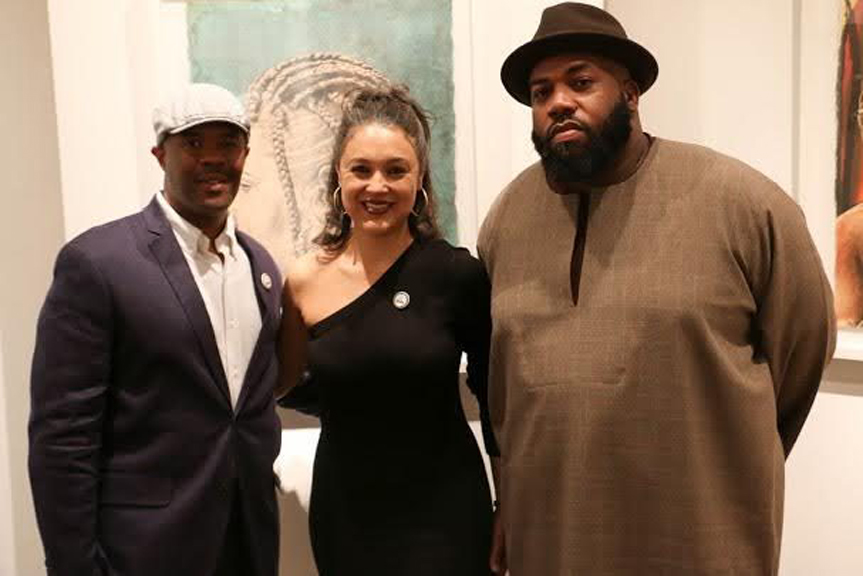 John Thomas and The 411 Brand has quietly been positively impacting the lives of youth in the City of Atlanta for 25 years.  The 411 Brand Foundation is a 501(c)3 nonprofit organization serving the United States and other international countries by providing young people information to make better choices for a better future. Their goal is to provide engaging entertainment, athletic and educational platforms that invite individual expressions with a loud voice and great influence. Some Atlanta’s best and brightest influencers and tastemakers stepped out to take part in The 411 Brand & The Resource Guild’s  “The Beauty Created – Celebrating What Can Happen When We Come Together” at the exclusive September Gray Fine Art Gallery. Remarks were given by Chris Hicks, the former Executive Vice President of Island Def Jam Records and the current Director of the City of Atlanta’s Mayor’s Office of Film & Entertainment.  Art curator September Gray introduced the featured artist for the evening Alfred Conteh & his critically acclaimed “Two Fronts: Surface and Reason” exhibit at this event that also served as the closing reception for the exhibit. Alfred Conteh’s work is currently featured in the March issue of the prestigious American Art Collector Magazine, one of America’s premiere art publications. Conteh’s portraits remind us of how rarely museums and galleries devote themselves to depicting African-Americans as subjects. Conteh’s portraits are set against colorful, streaked and pocked, patterned backdrops that pluck them from the realm of lived reality into some eternal place, the realm of myth-making and commemoration. Attendees mixed and mingled to the sounds of V-103’s own DJ Jelly, alongside the smooth vibes of jazz band, Elevate the Quest. Spirits flowed and taste buds were satisfied courtesy of Bomade Organic Lemonade Vodka, Redds Apple Ale, Miller Lite and The Food Networks own, Chef Kelley Hicks. The 411 Brand founder, John Thomas was truly thankful for everyone who came out to show love and support. While speaking he continued to emphasize that “We wouldn’t be able to do this 25 years strong, without the continued support of the city and the community.” It was truly an evening to remember with a intimate room full of influencers, philanthropist & representatives from major brands like Nike, AT&T, Bloomingdale’s, Steed Media, The United Way, The Urban League & many more.
Stay Connected:
The 411Brand on Twitter & IG: @The411Brand
The 411 Brand Website: www.The411Brand.com

::Courtesy of The Resource Guild ::