(ATLANTA, GA) November 2014 – November, or in the words of the artist Gilles (pronounced “Jills”) , “Yes-vember” is all about the release of “Super.”, his latest contribution to the music scene. The full-length project, set to be released on November 18, 2014, will be celebrated with an intimate listening party followed by the official album release party. Hosted by Art Beats + Lyrics Radio’s  “Day 1 Radio Show” team, the “Super.” album listening session is a private affair that will take place on Monday, November 10, 2014 at Blue Room Studios (500 Bishop St. NW, Atlanta GA 30318) from 7pm – 9pm. Anticipating the upcoming release, fans and friends are invited to attend the “very live” album release party, hosted by Power 105’s Angela Yee of The Breakfast Club, on Friday, November 14, 2014 at Studio No. 7 (393 Marietta St NW, Atlanta, GA 30313).

At the listening party, industry influencers and die-hard music enthusiasts will gather for an up close and personal sit down with Gilles to learn about the album and the artist beyond the music while also getting a preview of Super. before its release. There will be a question and answer period hosted by  media veterans Maurice Garland (Complex, The Source, VIBE Magazine), Branden Peters (AskMen, SLAM, Complex, XXL) and Nadine Graham (Billboard, Hip Hop DX, AOL Boombox) who have joined forces to host Day 1 Radio on AB+L Radio. Attendees will enjoy select beverages courtesy of Miller Lite and lite bites.

The “very live” album release party will be a festive celebration that will include Gilles performing the “Super.” album with the incredibly talented “Band of Brothers”.  This experience will be a first listen for his young professional, hip hop loving, undergraduate and advanced degree achieving fan base to hear the album for the first time. This event will feature guest dj’s Jeremy Avalon, Mikkoh and DDecoteau, a special art exhibit by Jermaine Clark and a gaming lounge courtesy of Konsole Kingz, the leaders in urban gaming internationally. Gilles has secured a promotional clothing partnership for “Super.” with Messrs. R/R clothing, an American menswear line that offers functionally tailored menswear and accessories.  Pieces from that collaboration will be available for purchase at the Pop-Up Shop at this event.  The evening will be hosted by the nationally syndicated radio personality Angela Yee.

Brooklyn-born, Atlanta-raised rapper Gilles doesn’t have the stereotypical hip-hop backstory. There is no hardscrabble history, no illegal hustle here. In fact, the rhymer from ATL’s Buckhead neighborhood was an attorney before he decided to take his musical career to the next level. Ready to break away from the corporate America grind, Gilles leverages his career to fuel and finance his passion of pursuing his music career. Amid the “turn up,” Gilles’ lyrics provide a smooth change of pace that is both gritty and artfully crafted. A self-proclaimed lover of the ladies, this Howard University graduate, seeks to represent his generation, a generation of individuals seeking something more, something to go hard for. His combination of Southern lyricism, his atypical tastes and history make for an interesting mix of relatability and uniqueness. 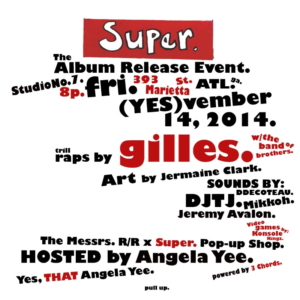